For all instruments -- please read F.A.Q. before posting.
Post Reply
4 posts • Page 1 of 1

Just saw on Clare FM Lissycasey concertinaplayer Gerald Haugh has died. One of the old style Clare concertinaplayers, Gerald was one of the stalwarts from a little hive of concertinaplayers, Noel Hill's birth home, Jack Talty and Dympna O'Sullivan were all from 'a few fields away'. He was recorded during the early seventies for the 'Irish Traditional concertina styles' lp that was released by Topic. Nice man, always ready for a chat or a tune or two. He was happy to play informally but always liked 'a bit of help', like many of that generation, if things became slightly more formal. Below a snap of him outside Crotty's, once the home of another concertinaplayer. If I remember correctly a recording was to be done for a local radio station when I took that, Raidió Corca Baiscinn, I had my arm twisted to sit in as the help on that occasion.

Thanks for the info Peter.

I always liked the man and he was one of the generation of musicians who communicated through their music. He never pushed himself forward or held himself out to be what he wasn't. I didn't know him too well but I met him and played with him in Kilrush.

I will dig out the concertina styles recording and have a listen to him again.

I was in Lissycasey last week, walked up to the cascades. I had the car parked outside the cemetary and had a thought for Dympna who is inside there. Driving back I was thinking about that little nest of concertinaplayers that existed there and how I hadn't seen Gerald for a while. During the course of the year I'd run into him in Ennis, out getting the messages.

He was pretty much a countryman of his generation with a great hunger to play music but a shyness at the same time. And he'd pounce on anybody who could sit in with him and give him an excuse to start up. I have been in that position a few times, he'd sweep you up and decide you were going somewhere for a few tunes and he wouldn't let you get away. The Limerick Lasses would be the warm up tune, often anyway.

There was one night I remember well, a Christmas eve in Gleeson's. Gerald arrived with his friend, fiddle player 'Buddy' O'Connell from Knockalough, we played music most of the night, sets were danced, McGivney was there, PJ and Peadar Crotty, Jackie Daly and the usual suspects. Kitty was just starting to feel her way back into playing and late at night she took out the concertina, Gerald coaxed a bunch of tunes out of her and carried her along. She got a great boost out of it and it was lovely music too. 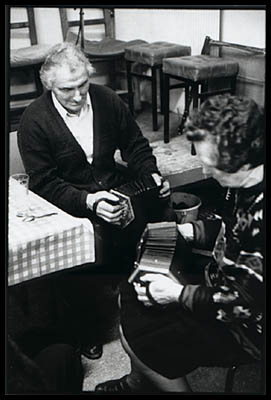 He was an all Ireland champion too, in 1975, before his neighbour started the great concertina boom that swept away the old styles.
My brain hurts

Thanks Peter. A great way to spend a Christmas eve.

Tom Carey was the same type. They all loved the music.
Top
Post Reply
4 posts • Page 1 of 1