A forum about Uilleann (Irish) pipes and the surly people who play them.
Post Reply
25 posts

Copying this thread over from 'thesession' website... sorry, haven't much time on my hands.

Missing pipes
Leonard Barry's pipes where left in a taxi on Sunday night in Dublin. They havn't shown up yet,so :
Twas a black case,full set,with yellow tape on them,
an Eamonn Curran boxwood chanter and there was a wooden F whistle in the case also.
Just puttn d word out,
ya never know....
thanks,

Re: Missing pipes
This is the only photo I found on the net:

Not much to go on I know.

As mentioned in the article the chanter is an Eamon Curran in boxwood, quite a dark, uneven stain on it and it has a bit of a bend in it if I remember rightly.

It says in the article that the regs and drones are by Brendan Ring, I was under the impression that they were Eugene Lamb in ebony brass and ivory type stuff...? I will verify later if he doesn't have em yet.

H.
# Posted on Wednesday, September 21st 2005 by Harry B
Re: Missing pipes
There's another here:
http://scwintersdorf.de/St.Patricks/Bands2004.htm

The drones and regs are indeed by Mr. Ring. blackwood, brass and light coloured wood (boxwood?) mounts. The end of the baritone reg is missing.

The low F whistle in the case is a wooden one by Grinter.

, becouse his latest cd was named "MIND THE PIPES"
and the name came after somebody sit on his chanter and broke it....
bad luck, hope he'll get his pipes back.
Top 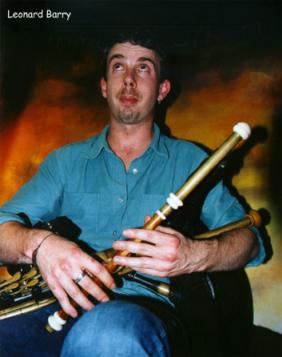 hope he gets them back, he's a good dood, have done that once befor myself with my old pipes, but got the taxi cab to bring them back he probably didnt know what they were.but if he's in dublin i fear someone might know what they are. thats why a few years ago i mentioned some sort of tracking device. maybe in the stock, so if they do go missing, you could possibly get them back.might sound a bit far fetched but could be a good thing? maybe...
Top

I ride bicycles a lot here in Winnipeg and they're stolen so often that insurance companies usually won't insure them. Several bike retailers suggest to people that you take a picture of yourself with the bike and slip that into either the handlebars or the seatpost tube. If you -or anyone you know- ever sees the bike, it's a great thing to be able to walk up to it and check. This has returned a few 'lost' bikes to their respective owners. I know it's not the same thing as a set of pipes, and it's not going to help in this situation.... actually this post is kind of useless, innit?

Nonetheless, I hope he gets his pipes back.

Someone on another thread some time ago recommended having a cord attached to the handle of your case with a clip on the end that you could clip to, say, a loop on your jeans or something when you were in transit---taxis, airports, etc. I suppose that could help in a situation like this. It's hard to keep track of a bunch of stuff. Then you're thinking about paying the cab driver, etc. Easy to get distracted.
Diligentia maximum etiam mediocris ingeni subsidium. ~ Diligence is a very great help even to a mediocre intelligence.----Seneca
Top

The Traveler on a blackwood Paddy Ward c. 2005
Top

Any word on the return yet?
Listen to me young fellow, what need is there for fish to sing when i can roar and bellow?
Top

Haven't heard the details yet, but the pipes have been found and returned to Leonard.

I hope he didn't have to pay a finders fee.
Top

Leonard's pipes have turned up.

It's quite a hilarious story.

He left them in the taxi, which the driver left with a mechanic to get serviced. When he picked the car up a couple of weeks later, the mechanic asked what was in the box in the boot.

The driver then remember leonard and returned the pipes to him.