GreenWood
Posts: 41
Joined: Thu Aug 12, 2021 11:00 pm
antispam: No
Please enter the next number in sequence: 8
Tell us something.: To add to the renaissance flute discussion that is under way. Well, the rest of this field is going to be taken up by a long sentence, which is this one, because a hundred characters are needed before it is accepted.

I was given permission by all involved to post a picture of my first Pratten style flute. This was sort of a desperate attempt to patch various misdrilled blanks together, try out conical bore making ideas, and mostly to find out what a Pratten style flute might play and sound like. The fact that I mistakenly placed the embouchure 3cm out of place regarding start of conical section means top notes in second octave are way out. The result though was a very unique instrument, a one piece olive wood "Pratten" : 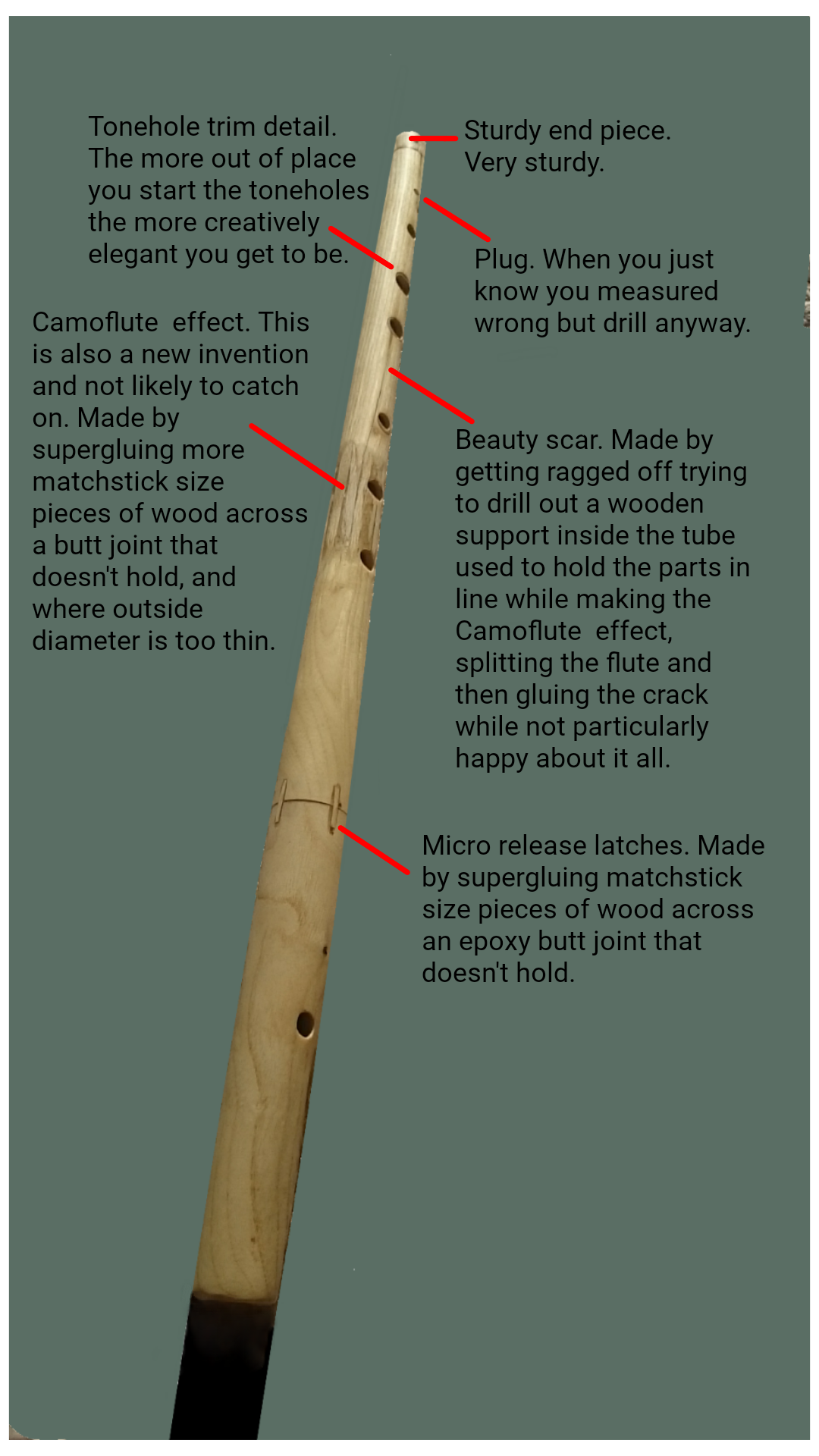 
And this is a short clip of me just playing around on it, I include it just to show it is playable for songs that fit within an octave or so

..... or just for fun and to learn on. No effects or eq.... and this flute is louder so not needed to be brought so close to mic on mobile, so less blowing hiss.

When I eventually make a proper version I will post a picture and recording also.

[I will just add that the techniques I have written about in the essays on making flutes, I wrote after and from the experience of making flutes like the above. In other words those essays are with the solutions I found. The above flute had to have a bore of 10mm or so to accept the reaming guide, and I had no 10mm steel bar to make an 11 or 12mm solid bit.... hence the misdrilled blanks and some of the explanation in those essays about various drill bit types...etc. The reaming itself, including conical, went smoothly. The design error for embouchure was a detail I knew about but then overlooked when building. ]
Top

Your first octave sounds very convincing and great pitch too!

Well done - looks like an upcycle venture could really make a stand .. or a flute stand.
Top

GreenWood
Posts: 41
Joined: Thu Aug 12, 2021 11:00 pm
antispam: No
Please enter the next number in sequence: 8
Tell us something.: To add to the renaissance flute discussion that is under way. Well, the rest of this field is going to be taken up by a long sentence, which is this one, because a hundred characters are needed before it is accepted.

Thanks Tonehole, the encouragement is very appreciated, and it helps remind that it is worth the effort of sharing.

I am learning about flutes from scratch, and wherever that takes me, but one thing going about it like that is that I'm not starting by expecting a certain sound from any flute. Instead I am just very slowly making one flute after another and finding out how they play, what sounds are possible from them. As I'm still much a beginner player that sort of combines quite well, because I'm prepared to keep trying any flute, because I don't realise they could be easier by a better design or that I'm learning technique more suited to another kind of flute, and all that because I'm learning tunes by ear from good players and trying to match them as far as possible with what I have at hand.

It's a shame I cannot get consistent recordings so far. Not only do I find recording distracting and generally don't enjoy playing when recording, the results are all over the place. The clip I linked there came out clear enough first go , but on my usual flute I haven't managed one clear recording yet, even though it does play cleanly . For me it isn't about my playing because it is where it is, it is more about showing what is possible with different kinds of flute. I'll eventually figure out a room and setup and mic position that works.

The main main thing I noticed on the flute pictured is the strong steady base octave. Each note seemed to be either on or off. On the renaissance style flute I can get deep base notes well when I'm on form, but it is harder. Instead that flute is more melodic, almost too much so because it speaks every nuance in change of fingering, reacts a lot to position held and so on. Smaller finger holes would make the articulation a bit cleaner but with less room for improvisation I guess. Anyway, the next flute I plan to build is a Rudall Rose dimensions one, so I will see if that is somewhere between the two, plus I have a Boehm conical one to finish which might be even closer to Renaissance style... plus I plan to build a more proper Pratten style one... and also a cylindrical bore after a Radcliff but keyless... and more renaissance flutes to try to find out how I managed to get top notes in tune... and so provide a basic working design, but in D....

So in return for all the effort of the making, most of which I enjoy anyway because it is all in my own time...well I guess it is like someone ordering a flute and having to wait for it to be made... except how the flute will actually be is more of a surprise....like the one above

If it wasn't fun somehow I don't think I would be making flutes...not having a degree in technical harmonics of subtropical wood species would be too much of a barrier... but if you look at all the instruments played over time, especially before mass production, you find every sort of construction imaginable... and people still played them because it brought them something. So in a way it is a privilege to be able to add to that even if the offering is simple or improvised. It is also a way of saying "thank you" for the enjoyment of playing, and most of all for the times when you hear someone else playing and it changes your day for the better

The recording sounds reasonable, even if a little closely picking up and dry.

What is your recording method like? I've done a few amateur studio recordings and live (terrible balancing). One of the biggest mistakes was to use a low frequency Hertz cut-off and not realise this effectively muted the bass response whilst I was playing away hearing myself happily ... and no one else hearing anything.

Good luck building the Pratten. I think if you come up with a solution for fixing flat foot syndrome without amputation of the short foot, that would be be amazing. Balancing the sonority across the three octaves ... wow what a challenge!
Top
Post Reply
4 posts • Page 1 of 1